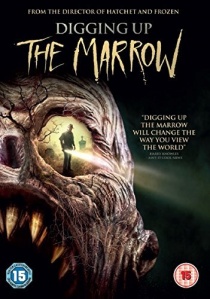 Filmmaker Adam Green receives a package in his fan mail from a mysterious man named William Dekker (Ray Wise, Twin Peaks, X-Men: First Class, Robocop). Dekker claims he can prove monsters do indeed exist and that these grotesque creatures are in fact forgotten, hideously deformed humanoids that inhabit a vast, underground metropolis of the damned!

Determined to discover the truth, Green and his crew embark on a mysterious, fantastical, and terrifying journey deep into the shadows - where they dare to go Digging Up the Marrow!

As a well-regarded innovator of the genre, Adam Green has been a huge fan favourite since unleashing the bloody and brilliant Hatchet on the world almost ten years ago. And while Digging Up The Marrow was kept under tight wraps during production, it's already accrued a cult following after the buzz from highly secretive screenings at a handful of movie festivals.

Blurring the lines between reality and fantasy, Digging Up The Marrow is released on DVD on 15th June 2015 courtesy of Kaleidoscope Home Entertainment.

HotDVDBD
With a 4K restoration supervised and approved by director Richard Kelly, one of the most talked-about films of the last twenty years, Donnie Darko, is being re-released in dual-format DVD and Blu-ray from Arrow Video on 12th December 2016. END_OF_DOCUMENT_TOKEN_TO_BE_REPLACED
Hot PicksView