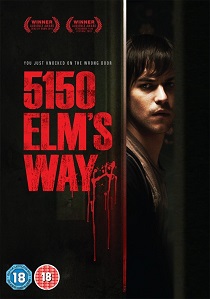 Directed by Éric Tessier (Rumours, Sophie) and based on the disturbingly intense best-selling novel by Patrick Senécal (7 Days), the award-winning horror, 5150 Elm's Way slashes its way onto DVD on 30th May 2011 from Entertainment One.

Rising star Marc-André Grondin (Ché: Part Two, The Chameleon) plays Yannick who has just moved off to college to pursue his love of film. He is out one afternoon exploring his new town with his trusted video camera when he accidentally falls off his bike, wrecking it in the process.

Yannick proceeds to the front door of 5150 Elm's Way, a house located at the end of a quiet street in a small town. He is met by Jacques Beaulieu (Normand D'Amour; Impasse, Father and Guns) who offers to call him a taxi whilst he cleans himself up. What Yannick doesn't realise is that he has just walked into a house he couldn't have dreamt of in his worst nightmare...

It turns out that Jacques is a fanatically religious psychopath, obsessed with chess, and on a quest to rid the world of evil. His daughter Michelle (Mylène St-Sauveur; In The Arms Of My Enemy, The Rocket: The Legend of Rocket Richard) is not your average teenager either, eager to gain approval from her father she will go to any lengths to do so.

After being beaten, tortured and tormented, Jacques makes Yannick an offer: win a game of chess and he will be free to go. Yannick is now taking part in a real life game of chess, playing a pawn in Jacques' twisted game in which he will either lose his mind or his life.

The film takes you on a terrifyingly dark and chilling trip through the mind of a psychotic individual, one who truly believes he is righteous and carrying out God's work. Some of the scenes in this film leave absolutely nothing to the imagination. Beautifully shot, and with heart-stopping performances from the cast, this is a must have film for all fans of the horror genre.