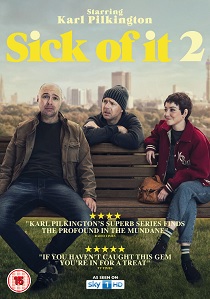 Karl and his grumpy alter ego return in the acclaimed tragi-comedy about a middle aged man haunted by the voice in his head. Surreal, joyful, poignant, and peppered with Karl's trademark wit and comic philosophising, Series 2 plunges us deeper into the world of the lovable loser as he lurches from one existential crisis to another.

When Karl's elderly Aunt Norma hires a sparky young care worker to replace him as her caregiver, Karl begins a mission to make more of himself. His hapless attempts at self-improvement are soon derailed while what began as outright hostility towards Norma's new carer blossoms into an unlikely attraction. With everything else falling apart in Karl's world, will they get it together? Or will Karl and his alter ego manage to sabotage his life once again?

Sick Of It: Series 2 is released on DVD 24th February 2020 from BBC Worldwide.

HotDVDBD3D-BDUHD
The producers of Godzilla reimagine the origins of one the most powerful monster myths of all in Kong: Skull Island, released on DVD, Blu-ray, 3D Blu-ray and UHD on 24th July 2017 from Warner Home Video. END_OF_DOCUMENT_TOKEN_TO_BE_REPLACED
Hot PicksView