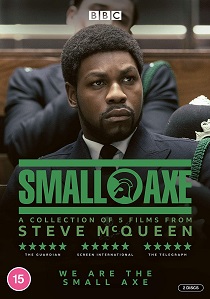 The first television project from Academy Award and BAFTA-winner Steve McQueen, this collection of films for television is based on the real-life experiences of London's West Indian community.

Set between 1968 and 1982, these standalone stories celebrate courage and community. From a group of activists taking on a seemingly hopeless battle against police persecution, to a teenager experiencing a blues party full of dance, danger and romance, they're a powerful reminder of how brave individuals can spark change. Small Axe delivers a message our divided world needs to hear: even the most marginalised voices can challenge the most powerful.

DVDBD
30/11/2020
Possessor, released on DVD and Blu-ray 8th February 2020 from Signature Entertainment, follows an agent who works for a secretive organisation that uses brain-implant technology to inhabit other ...

In Prodigal Son: Season 1, released on DVD 11th January 2021 from Warner Home Video, criminal psychologist Malcolm Bright knows how killers think and how their minds work. Why? His father is a serial killer who has taken the lives of more than 20 people.

Starring #ChrisHemsworth #TessaThompson #LiamNeeson, get ready for that #FridayFeeling with…