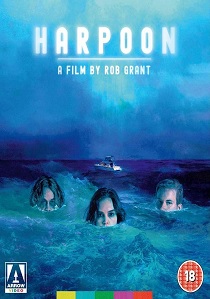 NewsHorrorArrow
News Article Go back to homepage
They say every story about love, friendship and betrayal extols a key lesson in virtue and morality. This is not one of those stories as Harpoon cruises onto Blu-ray 27th January 2020 from Arrow Video.
Brett Gelman, Munro Chambers, Emily Tyra, Christopher Gray
Rob Grant
Julian Black Antelope, Michael Peterson
Arrow Video
1 hour 23 minutes
27/01/2020
#Harpoon
As an Amazon Associate we earn from qualifying purchases
Buy BD
Information

They say every story about love, friendship and betrayal extols a key lesson in virtue and morality. This is not one of those stories as Harpoon cruises onto Blu-ray 27th January 2020 from Arrow Video.

Jonah (Munro Chambers, Turbo Kid), Richard (Christopher Gray, TV's The Mist) and Sasha (Emily Tyra, Code Black) have been friends a long time... maybe too long. Following a ferocious bust-up, Richard tries to make amends in the form of a sailing trip on his family yacht. After all, a friendship is the kind of ship that never sinks - until the yacht breaks down and the trio are left stranded in the middle of the ocean. As food and water supplies start to sink and rivalries, dark secrets and sexual tension start to surface, the question becomes: which of these three broken humans will run out of air first?

Dubbed a "twisty little thriller" (Eye For Film) that "will appeal to horror lovers everywhere" (Love Horror), Harpoon is Edgar Allan Poe by way of Seinfeld and an exercise in brilliant pacing, direction and acting. As the story takes darkly comedic and always unexpected turns, the three leads crescendo into a culmination of their respective crises of conscience - except the crisis here is that they have no conscience.

BD
The world's most lethal odd couple - bodyguard Michael Bryce and hitman Darius Kincaid - are back on another life-threatening mission as The Hitman's Wife's Bodyguard arrives on DVD, Blu-ray and 4K ... END_OF_DOCUMENT_TOKEN_TO_BE_REPLACED
Top PicksView