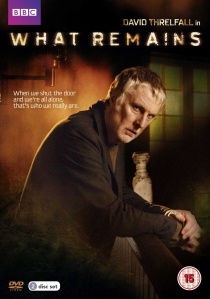 Brand new gripping four part BBC drama What Remains starring David Threlfall in his first major role since Shameless, alongside Russell Tovey (Him & Her), comes to DVD from Acorn Media following its run on BBC1.

This dark and riveting four-part series is currently screening at 9pm on Sunday evenings and stars a stellar ensemble cast alongside Threlfall and Tovey, including Amber Rose Revah (The Devil's Double), David Bamber (Psychoville), Steven Mackintosh (Luther), Indira Varma (Rome), Denise Gough (Robin Hood) and Claudie Blakley (Lark Rise to Candleford). It is released on DVD as a two-disc set on 7th October 2013.

In his last week on the job before retirement, DI Harper is determined to unravel the mystery and discover the secrets behind the doors of Melissa's neighbours.

There are partners Elaine (Varma) and Peggy (Victoria Hamilton) whose successful business and relationship is wrecked by the grim discovery. While Elaine never liked Melissa, Peggy is shocked and upset. But there is a dark secret connecting Elaine to the dead girl. Then there is divorced local newspaper editor Kieron (Mackintosh) and his son Adam (Alexander Arnold). Just what are the personal secrets that Kieron's hiding? And finally maths teacher Joe (Bamber) has lived in the house for 15 years. A stickler for rules and routine, he apparently lives alone, but it transpires that not all is what it seems in his basement flat...

"At its core, this is an ensemble piece about the spaces we share, the compromises we make, and the unwritten rules of communal living", says writer Tony Basgallop.