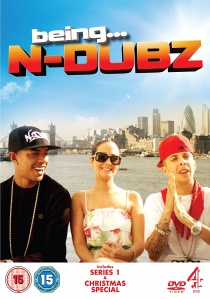 Music, Mischief and Mayhem! Join Dappy, Fazer & Tulisa in their hit reality series, Being...N Dubz: Series 1 and Christmas Special, out to own on DVD from 24th September 2012 from 4DVD.

Being...N Dubz follows the lives of chart topping troublesome trio N -Dubz as they make the most of their newfound fame.

In this reality series, join Dappy, Fazer & Tulisa as they take a trip down memory lane, comfort crying fans and lay down new tracks in the studio. Witness their naughty antics, including narrowly avoiding a punch up with rival artist, Lethal Bizzle and running riot on the T4 set. Watch the mayhem unfold when mischievous Dappy goes missing in the airport... Will Tulisa and Fazer find him in time to catch their flight?

N Dubz are a MOBO award-winning British Hip-Hop group from Camden made up of the fiery and fun trio, Dappy, Fazer & Tulisa. They have enjoyed six top 40 hits on the UK Singles Chart and have since had success as chart topping solo artists.

Packed with celebrity guest appearances including, Mr Hudson, Rochelle Wiseman and many more, own this must have DVD which includes the Christmas Special from 24th September 2012.