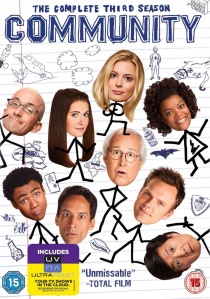 Season Three brings new changes to the Greendale campus, as well as its students. Senor Chang now lives in the school's air vents working as Greendale's Campus Security Officer; Troy and Abed move in together; and a new Vice Dean is in town.

Community: The Complete Third Season contains all 22 episodes on a three-disc DVD set and is loaded with bonus material, including fan-favourite spoof episodes full of mystery, crime and even some glee! Special features also include cast and crew commentary on every episode, This is War: Pillows vs. Blankets mockumentary featurette, A Glee-ful Community Christmas featurette, deleted scenes, and a gag reel.

America's most incorrigible study group of misfits returns for a hilariously ingenious new year at Greendale Community College. From homicidal Halloween pizza parties, holiday Glee Club smackdowns, foosball showdowns, epic pillow fight wars and an underage campus security force to a shocking remarriage, a riotous funeral service, submarine sandwich throwdowns, a new Vice Dean (Emmy Award® Winner John Goodman) with a strange air-conditioning fixation and a crime show homage for the ages - the Third Season of television's boldest, brashest comedy is the most brilliant yet. Get ready to cram it all in.

UHD
A decade-defining classic from the imagination of Steven Spielberg and Chris Columbus, celebrating its 35 year anniversary, The Goonies is released on 4K UHD 31st August 2020 from Warner Home Video. END_OF_DOCUMENT_TOKEN_TO_BE_REPLACED
Top PicksView