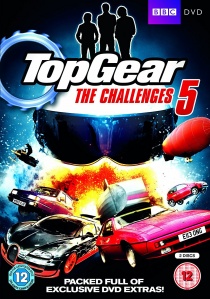 NewsTV SeriesSpecial Interest
News Article Go back to homepage
With a new DVD featuring 13 of the latest most fuel-injected, exhilarating challenges, the troublesome trio are at it again in Top Gear The Challenges 5, released from 2entertain on 13th June 2011.
James May, Jeremy Clarkson, Richard Hammond
2entertain
4 hours 30 minutes
13/06/2011
Thank you for supporting DVD365.net when you order using the link(s) below. As an Amazon Associate we earn from qualifying purchases
Buy DVD
Information

The troublesome trio are at it again in a new DVD featuring 13 of the latest most fuel-injected, exhilarating challenges. Packed with over an hour's worth of extras, witness the Top Gear team embark on a number of outrageous attempts to out-do each other in this perfect gift for Father's Day.

This extra special release contains the brand new Stig, bursting onto the track in a whirlwind of record breaking laps, the Top 3 of which are featured on the DVD. Extras include riotous outtakes, the breathtaking Atom V8 lap and an extended version of one of Top Gear's most talked about interviews with Hollywood A-listers, Cameron Diaz and Tom Cruise.

Fasten your seatbelts as the team put some budget sports saloons through their paces in Europe's home of speed and watch Hammond take on two snowmobiles in the new Volkswagen Touareg in Sweden. Back in the UK the boys attempt to prove that old British sport cars never deserved to be killed off by the hot hatch and join them on a camping holiday in Cornwall as they endeavour to build their own motorhomes.

Richard investigates ways to speed up your next summer holiday as he invents the brand new sport of airport vehicle racing. May drives a modified Hilux to the rim of that unspellable Icelandic volcano that subsequently shut down Europe's airspace. Plus Jeremy undertakes an epic journey across Yorkshire in Top Gear's favourite three-wheeled menace. Warning: contains Peter Stringfellow.

And if all this isn't enough to fuel your need for speed, Captain Slow straps himself into the ultimate version of the Bugatti Veyron, the 1,183bhp SuperSport, in an attempt to break a world record by reaching 258mph. Together on DVD for the first time, these thrilling challenges are yours to own on 13th June 2011 from 2entertain, don't go getting any ideas though!