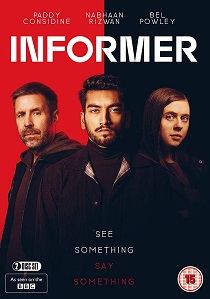 Informer, released on DVD and Blu-ray 10th October 2018 from Spirit Entertainment Ltd, is a complex, character-driven thriller about Raza, a young second generation British-Pakistani man from East London (Nabhaan Rizwan) who is coerced by Gabe, a Counter-Terrorism Officer (Paddy Considine) into informing for him.

Gabe, who has a past he wants to remain secret, is joined by Holly, his new and ambitious partner (Bel Powley) whose endless curiosity becomes a threat to him.

As the central counter-terrorism investigation heats up, the stakes for all three, their families and relationships, get higher and higher.

Informer tells a story about identity in a world where lines are increasingly being drawn and sides are being taken. What happens when you, or your friends, family or neighbours fall on the wrong side of that line and the personal becomes political?

Related Articles
Patrick Melrose, Partners In Crime, Call the Midwife: Series 3, Baptiste
The Last Post, The Casual Vacancy, In The Flesh, Dracula
Carrie Pilby, Diary of a Teenage Girl, A Royal Night Out, Benidorm: Series 6
The Girl With All The Gifts, Macbeth, Miss You Already, Child 44, Pride, The Suspicions of Mr Whicher: Complete, Honour, Now Is Good, Blitz, Submarine, The Backwoods, Bourne Ultimatum, In America, Funny Cow, The Outsider: Season 1, How To Build A Girl
Comments
UHD Releases News Pick