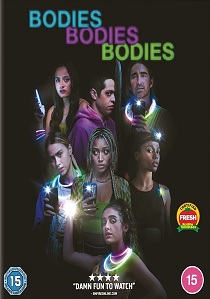 Prepare yourself for the Gen-Z slasher film of the year as Bodies Bodies Bodies is available to own on Blu-ray 28th November 2022, from Sony Pictures Home Entertainment.

When a group of rich 20-somethings plan a hurricane party at a remote family mansion, the decision to play a seemingly innocent party game soon begins to derail the evening. As the storm sets in and the gang start to lose their connection to the outside world and each other, the privileged zoomers quickly learn about each other's friendship and loyalty.

Bodies Bodies Bodies is a fresh and funny look at backstabbing, fake friends, and one party gone very, very wrong.

Related Articles
Revolt, The Book of Henry, The Program, Halt and Catch Fire: Season 1, Guardians of the Galaxy, Wonderfalls: The Complete Series, The Resident
Everything, Everything, The Darkest Minds, The Hate U Give, Dear Evan Hansen
Comments
BD Releases News Pick

BD
In Brian And Charles, released on DVD and Blu-ray 10th October 2022 from Mediumrare, an inventor lives alone in a remote village in the countryside, inventing useless things out of found objects in his garage. That is until ... END_OF_DOCUMENT_TOKEN_TO_BE_REPLACED
Top PicksView