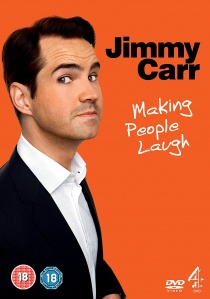 Featuring two hours of fresh material that's just too rude for television, with two hundred and fifty corking gags, you will see Jimmy Carr at his very best; whether it's delighting - and sometimes shocking - the nation with relentless one liners or putting down brave hecklers with equal panache, this will have you struggling for air.

Filmed earlier this year at the SECC Glasgow during his latest tour, the DVD will also feature never-been-seen-before extras including Jimmy's Twitter Diary, a Comedy Central Special and bonus stand up material (including Jimmy Carr Just For Laughs - a selection of his gala performances at the Montreal Comedy Festival, Jimmy on Famous People - some potentially libellous (and certainly treasonous) jokes, and Jimmy Meeting and Greeting - Jimmy saying hello to fans after the live record in Glasgow).

Jimmy continues to entertain households across the UK each week as the host of the 9th series of 8 out of 10 Cats, one of the UK's longest running comedy series and the most successful comedy panel show in Channel 4 history. He has recently hosted the hugely successful Channel 4 show, Comedy Roast, which he will be back hosting in the Autumn. He was also at the helm of Channel 4's cutting edge Alternative Election 2010.

He is also a big hit in America, making more appearances on The Tonight Show with Jay Leno than any other British comedian and has been a guest on Late Night with Conan O'Brien ten times. He hosted two series of Distraction on Comedy Central in the last few years and two half hour Comedy Central Specials. His Canadian following also continues to grow and he returns to headline the Montreal Just For Laughs Festival this year for the fifth time.

Jimmy has won a host of awards including a British Comedy Award for best Live Stand Up Tour, several Loaded LAFTAS Awards for Best Stand Up, a Perrier Award nomination, Best Stand Up at the Time Out Awards and Best on Screen Newcomer from the Royal Television Society. His other TV accolades include the prestigious Silver Rose of Montreux award and a Rose d'Or nomination for Best Host at the 2009 awards. He also continues to have a huge following on Facebook and Twitter where he has gained cult status with his daily quips and updates.