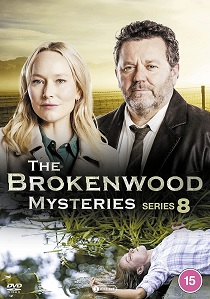 Time for another trip down under, back to the town of Brokenwood, New Zealand, where the population is small, and the murder rate is high, as The Brokenwood Mysteries returns for an eighth series and delivers another slew of gripping murder mysteries. Following its run on UKTV Drama beginning this September, Acorn Media International brings the much-loved show to DVD and digital as The Brokenwood Mysteries Series 8 and the full bumper box Series 1 to 8 Box set on 7th November 2022.

This delightful Kiwi mystery drama follows Detective Mike Shepherd (Neill Rea - Go Girls), who arrives in the seemingly sweet and sleepy town of Brokenwood. Arriving in a classic car with a country music collection and an indeterminate number of ex-wives, Shepherd is joined by his by-the-book assistant, DC Kristin Sims (Fern Sutherland - The Almighty Johnsons). It's not long before Shepherd discovers that Brokenwood is full of secrets and suspicions... From mysterious murders to secret societies, alongside gruesome goings-on, killers lurk between the shadows in the seedy underbelly of this town.

Series Eight sees Brokenwood C.I.B's finest, D.S.S. Mike Shepherd and his associates, Detective Kristin Sims, D.C. Daniel Chalmers (Jared Rawiri - Shortland Street), and Doctor Gina Kadinsky (Cristina Ionda - Filthy Rich) back for more enthralling investigations. This curious team of detectives work together with a warm camaraderie and deadpan humour against the background of sublime small-town New Zealand and must investigate fresh murder cases, including an ancient family feud which leads to the murder of a modern-day cowgirl, a dead body found in the most unlikely of places, murder most foul at a music festival, and could they possibly have Brokenwood's first ever serial killer on their hands?

HotDVDBDTV
DCI Tom Brannick returns, as the murder of a crooked accountant unravels a trail of greed that threatens to expose the true identity of the legendary assassin, codenamed, Goliath in Bloodlands: Series 2 released on DVD and Blu-ray 14th November 2022 from Dazzler Media. END_OF_DOCUMENT_TOKEN_TO_BE_REPLACED
Top PicksView