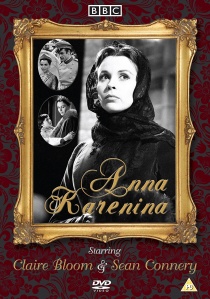 Anna Karenina, the BBC's triumphant 1961 adaptation of Leo Tolstoy's romantic masterpiece starring Sean Connery and Claire Bloom is yours to own on DVD from 27th September 2010, courtesy of Simply Media.

When the beautiful young aristocrat Anna Karenina (Claire Bloom) meets the dashing Count Vronsky (Sean Connery) at a Moscow railway station, their first encounter is overshadowed by misfortune. Trapped in a loveless, arranged marriage with the cold Alexei Karenina, Anna tries her best to resist the passionate advances of Vronsky. Eventually succumbing to his allure, Anna grows to be his mistress. Her actions cause outrage in St Petersburg society and her husband not only refuses her the dignity of a divorce but also prevents her from seeing her beloved son - unless she agrees to leave Vronsky forever.

Shunned, heartbroken and trapped by the very love she'd always sought, Anna's actions become ever more desperate. Anna Karenina is a classic revision adapted by Donald Bull and directed by Rudolph Cartier, who sweeps the film to a shocking conclusion. Made just a year before Sean Connery first starred as James Bond in Dr No, Anna Karenina is a timeless, classic BBC drama to treasure.