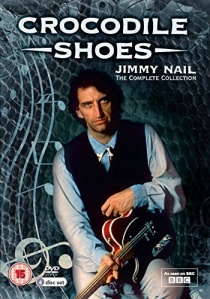 Crocodile Shoes is the hit TV series which follows the life of a Newcastle born factory worker who attempts to make his dreams come true as a country singer.

Starring and written by Jimmy Nail (Auf Wiedersehen, Pet) who plays Jed Shepperd, Crocodile Shoes was first screened on BBC One in 1994 and comes to DVD for the first time ever as a four-disc set on 2nd September 2013 courtesy of Acorn Media.

With the prospect of redundancy looming, Jed makes a lifetime decision to quit his job and pursue his dream career as a country singer. From Newcastle to Nashville and back again, this is a story of fame and fortune; adventures, opportunities, conflicts, heartaches, the rise, the fall.

DVD
Two lifelong friends find themselves at an impasse when one abruptly ends their relationship, with alarming consequences for both of them in The Banshees Of Inisherin, released on DVD and Blu-ray 30th January 2023 from Walt ... END_OF_DOCUMENT_TOKEN_TO_BE_REPLACED
Top PicksView