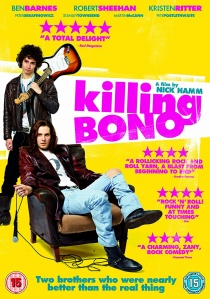 Killing Bono tells the story of two Irish brothers struggling to forge their path through the 1980s music scene. whilst the meteoric rise to fame of their old school pals U2 only serves to cast them deeper into the shadows. Based on Neil McCormick's autobiography; this fresh and funny coming of age tale leads viewers on a side-splitting tale of finding out not everyone can make it to the top. It's about teenage frustrations through the ages - full of fashions, passions and is the ultimate ride to fulfilling a rockstar dream.

Ben Barnes plays Neil McCormick whose dream is to become the biggest rock star in the world with his younger brother Ivan (Robert Sheehan) playing right beside him. As the McCormick brothers desperately try to break into the music scene with their band, trouble always seems to end up in their life. From owing the town's gangster money, being stuffed in a trunk, or just making really bad choices; laughing is the only solution to their dilemmas.

Killing Bono shows the importance of family as brotherhood is tested on numerous occasions. Giving you an intimate look at the multiple events that challenged the McCormick brothers; this film will take you for a ride on what it takes to be a "rockstar". As his rock n' roll dream crashes and burns, Neil feels like his failure is directly linked to Bono's success. Is he the yin to Bono's yang? Is he forever destined to live in the shadows of superstardom? And what if the answer lies in... killing Bono?

Being in a Rubbish band has never been this funny as the McCormick brothers desperately try to break the music scene.