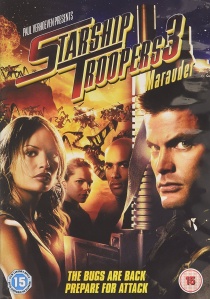 The bugs are back as Starship Troopers 3: Marauder comes to Blu-ray and DVD from 29th September 2008, courtesy of Sony Pictures Home Entertainment. Casper Van Dien (Starship Troopers) reprises his defining role as the fearless Johnny Rico in this, the third installment of the hugely popular sci-fi adventure phenomenon.

The swarming, killer bugs are back, once again wreaking havoc on humanity in this action-packed adventure also starring Jolene Blalock (TV's Star Trek: Enterprise and Stargate SG-1), Amanda Donohoe (Liar Liar, TV's LA Law), and Catherine Oxenberg (TV's Watch Over Me and Dynasty). Presented by Paul Verhoeven (Starship Troopers, Basic Instinct) and written and directed by Ed Neumeier, who has previously written and co-produced the original Starship Troopers and Robocop, Starship Troopers 3: Marauder is easily one of the sci-fi action events of the year.

Johnny Rico (Van Dien) faces off against the murderous bugs once more as he leads his team on a secret mission to rescue a crew of troopers stranded on the remote planet of OM-1. Battling bugs both new and old, the team's new 'Marauder' weapons technology may be their only hope against a treasonous element operating within the Federation itself. As Captain Lola Beck (Blalock) and the rest of the crew fight to survive in harsh conditions, it begins to dawn on them that something on OM-1 is very, very wrong - and this time the bugs have a secret weapon that could destroy humanity...

Starship Troopers 3: Marauder comes with a host of extra features on both Blu-ray and DVD. What's more, all three Starship Troopers films will be available together for the first time, on both DVD and hi-def Blu-ray Disc, with the Blu-ray box set also featuring all-new special features, including a 'FedNet Mode' Picture-in-Picture feature that includes loads of extra content looking inside the sci-fi satire and beyond. Additionally, the Blu-ray features a 'Recruitment Test' trivia challenge and a BD-Live interactive feature, 'Put Yourself in the Film: Join the Fight!'