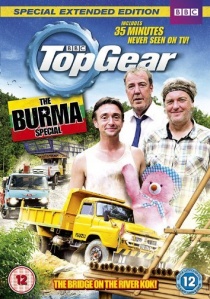 Top Gear specials are known for epic journeys, incredible scenery and the amusement of three idiots having a hard time. What they're not known for is challenging civil engineering projects. Until now. In this special Clarkson, Hammond and May don't just buy three knackered old lorries and drive miles through the beautiful landscapes of Burma. Oh dear no. They actually have to use their lorries to do something useful.

They have to build a real, useable bridge over the River Kwai. On their way to the river they almost bring down Burma's power supply, encounter the world's least relaxing truck stop, race around the streets of a deserted capital, saddle up a trio of unhelpful horses and attend a completely deranged party.

The Burma special has everything. And this box contains MORE than everything because it also contains unseen footage AND exclusive extras. What more do you want? An actual bridge? Oh, you do? Well we know three buffoons who could help you with that...

Top Gear - The Burma Special is released on DVD and Blu-ray on 2nd June 2014 courtesy of BBC Worldwide.

DVD
Released on DVD 4th April 2022 from BBC Worldwide, Golden Globe, Emmy and BAFTA winner Ben Whishaw stars in This Is Going To Hurt, Adam Kay's adaptation of his best-selling memoir about life as a junior doctor. END_OF_DOCUMENT_TOKEN_TO_BE_REPLACED
Top PicksView