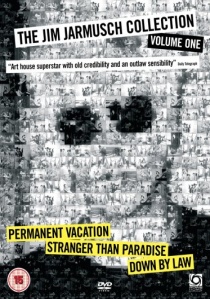 News
News Article Go back to homepage
The Jim Jarmusch Collection: Volume 1, comprising of Permanent Vacation, Stranger Than Paradise and Down By Law is released by Optimum Home Entertainment on the 12th May 2008.
John Lurie, Eszter Balint, Richard Edson, Cecilla Stark, Roberto Benigni
Jim Jarmusch
Alan Kleinberg
Optimum Home Entertainment
4 hours 23 minutes
12/05/2008
Thank you for supporting DVD365.net when you order using the link(s) below. As an Amazon Associate we earn from qualifying purchases
Buy DVD
Information

The Jim Jarmusch Collection: Volume 1, comprising of Permanent Vacation, Stranger Than Paradise and Down By Law is released by Optimum Home Entertainment on the 12th May 2008.

Born in Ohio in 1953, Jim Jarmusch left his hometown at the age of 17 for New York City, where he was accepted into NYU's prestigious Tisch Film School, despite having no prior film experience. After early critical acclaim for his debut Permanent Vacation (1980), Jarmusch wowed critics with Stranger than Paradise (1984), winning the Camera D'Or at Cannes: the award for Best First Film. The iconic Down by Law (1986) completes this first Jarmusch box-set from Optimum and stars musicians-turned-actors Tom Waits and John Lurie (Lounge Lizards) - who also contribute to the soundtrack.

The epitome of laid-back cool, Jarmusch works time and again with the same bunch of eclectic actors, musicians, artists and technicians, producing work of distinct visual and narrative appeal that, with these films earned him first a loyal cult audience, then subsequent international acclaim and box office.

Made for just $15,000, Permanent Vacation was actually rejected by the Tisch school as Jarmusch's final thesis for being "a waste of their time". Aloysius "Allie" Parker (Chris Parker) embarks on a thoughtful meander around a surreal, almost post-apocalyptic New York City, bored by life and inspired by the improvisational jazz of his hero Charlie Parker. Co-starring Frankie Faison and featuring the first collaboration of many between Jarmusch and Lounge Lizards' John Lurie (soundtrack), Tim DiCillo (cinematographer), Richard Boes and Sara Driver, amongst others.

Structured around the Screamin' Jay Hawkins song I Put A Spell On You, Stranger Than Paradise sees John Lurie move centre stage as New York hipster Willie who forms an unexpected bond with his young Hungarian cousin Eva (Estzer Balint) when she comes to visit him unannounced. Eva then moves to Cleveland to live with their Aunt Lotte (Cecilia Stark), and it's almost a year later that Willie takes his best friend Eddie (Richard Edson) to see her; a visit that culminates with an eventful road trip to Florida. Winner of both the Camera D'Or at Cannes and the Special Jury Prize at Sundance on its release along with a host of other international awards.

DJ Zack (Tom Waits) and pimp Jack (John Lurie) end up in jail because they are too laid-back to defend themselves for crimes they didn't actually commit. Sharing their cell is Roberto (Roberto Benigni) - a eccentric Italian optimist - who along with a poor grasp of English possesses knowledge of an escape route. After their breakout, the unlikely trio find themselves stumbling on an isolated diner in the Louisiana swamps, whose proprietor is a lonely Italian woman (Benigni's real life wife Nicoletta Braschi).