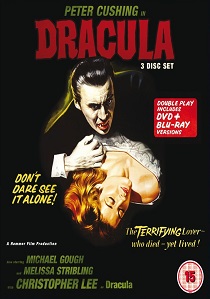 Hammer, Icon Film Distribution and Lionsgate are proud to present a major event in British film history. Terence Fisher's 1958 classic Dracula, fully restored in High Definition and available on Blu-ray and DVD for the first time on 3-disc Double Play on 18th March 2013.

The release will contain two versions of the feature (seamlessly branched on the Blu-ray) - The 2007 BFI restoration plus the 2012 Hammer restoration, which adds additional footage that has been unavailable for decades.

The additional footage comprises two of the scenes that were originally censored by the Bbfc in 1958 that have now been restored to the film from the "Japanese reels":

These will be the most complete versions ever released and taken together fully deserving of the description Definitive.

Dracula has been unavailable on any UK home entertainment format for many years. This release will be at the correct aspect ratio of 1.66:1 which has never been available for home viewing.

Dracula is the first in the series of Hammer films inspired by the Bram Stoker novel Dracula. It was directed by Terence Fisher and stars Peter Cushing, Michael Gough, Carol Marsh, Melissa Stribling and Christopher Lee.

Dr. Van Helsing, investigating the death of his friend Jonathan Harker, concludes that Harker was the victim of a vampire. When Harker's fiancée, Lucy, becomes affected by the terrifying force and hypnotic power of Count Dracula, Van Helsing releases her tortured soul by driving a stake through her heart. But Dracula seeks revenge, targeting Lucy's beautiful sister-in-law, Mina. Van Helsing, now aided by Mina's husband Arthur, swears to exorcise this evil forever by confronting the vile and depraved Count himself.