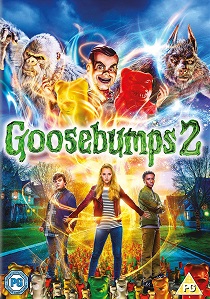 The Goosebumps 2 Blu-ray and DVD bonus features include a gag reel full of hilarious hijinks, three all-new deleted scenes and five featurettes. Between the chills, thrills and goosebumps, watch the cast get a case of the giggles in the Gag Reel. Dive deep in Thrills & Chills - The Making of Goosebumps 2 with Madison Iseman, along with behind-the-scenes footage and interviews with the cast and crew. Meet the Monsters gives fans a sneak peek of how the scary creatures were brought to life.

In Slappy's Audition, watch what happens when Slappy auditions for the role he was born to play. In Science with Slappy, enter the Slapatory where Madison, Jeremy and Caleel join Slappy for some electrifying experiments! And get ready to sing along with three hilarious Slappy-oke songs. Who knew dummies could sing?

Be careful what you wish for. With their after school junk business, best friends Sonny and Sam hope to find treasure in other people's trash. But when cleaning out the old Stine house, they open a locked book that frees a supernatural nightmare - Slappy! Now, with the help of Sonny's sister Sarah, they're in a race against time to get the sinister dummy and all the creatures he's brought to life back into the pages before he unleashes total pandemonium!

Based on the beloved Scholastic book series by R.L Stine, Goosebumps 2 was directed by Academy Award®-winner Ari Sandel (2005, Best Short Film-Live Action, West Bank Story) from a story by Rob Lieber and Darren Lemke and screenplay by Lieber. The film is produced by Deborah Forte and Neal H. Moritz and is executive produced by Timothy M. Bourne and Tania Landau. 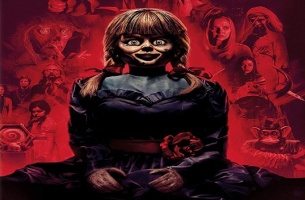 HotBD
Combining the bio-horror elements of his earlier films whilst anticipating the technological themes of his later work, Videodrome, released on Blu-ray from a restored high-definition digital transfer by Arrow Films on 7th December 2015, exemplifies Cronenberg's extraordinary ... END_OF_DOCUMENT_TOKEN_TO_BE_REPLACED
Top PicksView