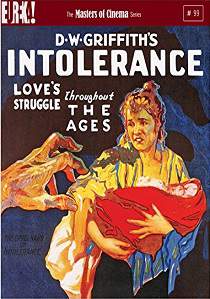 After shaking the world with his hugely controversial epic The Birth of a Nation, pioneer filmmaker D. W. Griffith spared no expense in putting together his next project, Intolerance (Love's struggle throughout the ages) : a powerful examination of intolerance as it has persisted throughout civilisation, set across four parallel storylines that span 2500 years.

There is the Babylonian story, depicting nothing less than the fall of Babylon; the Judean story, which revolves around the crucifixion of Christ; the French story, which presents the St. Bartholomew's Day Massacre in all its horror; and a modern American story of class struggle, crime, and the plight of life in the early 20th century set within urban slums and the prison system.

Starring such luminaries as Lillian Gish, Constance Talmadge, and Miriam Cooper, who share screentime with an enormous main cast and some 3,000 extras, Griffith's film the most expensive motion picture ever produced at the time went on to become a critical success whose influence has only grown in the decades since. The Masters of Cinema Series are proud to present the 2013 restoration of Kevin Brownlow's and David Gill's preserved Intolerance, featuring Carl Davis's orchestral score, for the first time on Blu-ray in the UK on 8th December 2014.