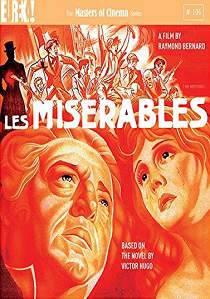 The most thorough of all film adaptations of Victor Hugo's immortal novel, Les Misérables [The Wretched] was a triumph for director Raymond Bernard, one of the more overlooked filmmakers of the early French cinema.

Originally released in quick succession as three separate features in 1934, Bernard's film recounts the story of the ex-convict Jean Valjean (Harry Baur) harried by the wicked Inspector Javert (Charles Vanel); of the virtuous Fantine (Florelle, née Odette Rousseau) who sells herself into prostitution for the welfare of her daughter Cosette (Gaby Triquet as the young girl Cosette, and Josseline Gaël as the young woman); and of intersections of these threads and more in an impressive rendering of Hugo's stately tapestry.

Newly restored in 4K at its original length by Pathé, Les Misérables is a major accomplishment on the level of storytelling, and a major component in the history of French film. The Masters of Cinema Series is proud to present Raymond Bernard's magnum opus for the first time on Blu-ray and DVD in the UK from 8th December 2014.