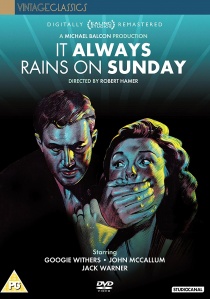 It Always Rains On Sunday: Remastered (1947)

To coincide with the BFI release of this oft-overlooked Ealing classic on October 26th as part of their Ealing retrospective, StudioCanal are very pleased to announce that they will be releasing a brand new special edition DVD and first ever Blu-Ray of It Always Rains On Sunday on 12th November 2012.

Perhaps over-shadowed by its more famous comedic cousins at Ealing, It Always Rains On Sunday has steadily grown in stature as one of the earliest and best examples of British film noir. Based on the novel by Arthur La Bern (also the original author of Hitchcock's Frenzy), the film is a gritty drama that plays out in the rain-­-drenched streets of the East End one Sunday.

Directed by Robert Hamer (Kind Hearts and Coronets, Pink String & Sealing Wax), It Always Rains On Sunday stars Googie Withers in a towering performance as Rose Sandigate, a bitter Bethnal Green housewife stuck in a dull marriage, hemmed in on all sides by well-meaning but nosey neighbours and jealous of the burgeoning social life of her precocious stepdaughter. Her dreary world is turned upside down by the sudden re-appearance of an old flame, Tommy (played by Googie's real-life husband John McCallum), on the run from the police having escaped from prison. Rose hides Tommy in her bedroom all day as the house's domestic routine unfolds around them, police and journalists alike calling at her door looking for him.

Around this central couple Hamer weaves a vivid, multi-layered tapestry of life in the post War East End - the bustling markets, a Jewish immigrant family on the rise, seedy boarding-houses with their anonymous guests, the Saturday night dance halls full of hopeful teenagers, the petty criminals desperately selling on their ill-­-gotten gains... a complex narrative structure that can be seen to have inspired everyone from Robert Altman to Quentin Tarantino. The film climaxes with an unforgettably stunning chase sequence filmed in the railway yards of Stratford, shot by the incomparable Douglas Slocombe. A detailed glimpse into life in London's East End post WWII, It Always Rains On Sunday was Googie Wither's last film for Ealing Studios and, due to her wonderful performance as a woman trapped in a claustrophobic domesticity, it remains one of her best

It Always Rains On Sunday has been digitally remastered from two nitrate fine grain positives, dating from 1947. Repair has been carried out by the BFI National Archive on picture and sound as appropriate, to present the film authentically on modern digital formats.

HotUHD
After moving to a new town, two brothers discover that the area is a haven for vampires as the classic The Lost Boys is released on 4K UHD 20th September 2022 from Warner Home Video. END_OF_DOCUMENT_TOKEN_TO_BE_REPLACED
Top PicksView