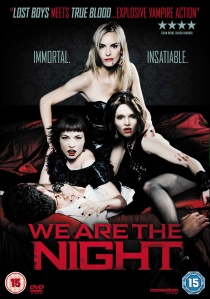 NewsHorror
News Article Go back to homepage
A super-sensual and seriously stylish amalgamation of Near Dark, The Lost Boys, True Blood and The Hunger, this is one vampire action-thriller with plenty of bite as We Are The Night is released on DVD from Momentum Pictures on 15th October 2012.
Arved Birnbaum, Max Riemelt, Anna Fischer, Jennifer Ulrich, Nina Hoss, Karoline Herfurth
Dennis Gansel
Bernhard Thür, Oliver Nommsen, Christian Becker
Momentum Pictures
1 hour 39 minutes
15/10/2012
Thank you for supporting DVD365.net when you order using the link(s) below. As an Amazon Associate we earn from qualifying purchases
Buy DVD
Information

Directed by Dennis Gansel (The Fourth State; The Wave) and starring Karoline Herfurth (The Reader; Perfume), Nina Hoss (The Anarchist's Wife; Yella), Jennifer Ulrich (The Wave; Atomised), Anna Fischer (Beloved Berlin Wall; The Rebel) and Max Riemelt (The Fourth State; Urban Explorers; The Wave), a super-sensual and seriously stylish amalgamation of Near Dark, The Lost Boys, True Blood and The Hunger, the vampire action-thriller with plenty of bite We Are The Night is released on DVD from Momentum Pictures on 15th October 2012.

When she unknowingly picks the pocket of a man one night on the streets of Berlin, small-time crook Lena attracts the unwanted attention of Inspector Tom Serner, a young police detective involved in ongoing investigations into Lena's victim, a known Russian mobster. Although she manages to escape Tom's clutches, Lena's personal situation becomes even more complicated when she later visits an underground nightclub and meets Louise, the club's owner and the leader of a trio of female vampires that also includes "young" party girl and DJ Nora and former 1920s silent film star Charlotte.

Louise immediately falls in love with Lena and decides to transform her, introducing her to a glamorous existence of non-stop partying, fast cars, limitless night-time shopping sprees and eternal life. But it all comes at a price. As Lena struggles to come to terms with the endless killings and attempts to fend off Louise's Sapphic advances, the bloodthirsty quartet's murderous activities draw Tom and his police colleagues ever closer.

UHD
A decade-defining classic from the imagination of Steven Spielberg and Chris Columbus, celebrating its 35 year anniversary, The Goonies is released on 4K UHD 31st August 2020 from Warner Home Video. END_OF_DOCUMENT_TOKEN_TO_BE_REPLACED
Top PicksView