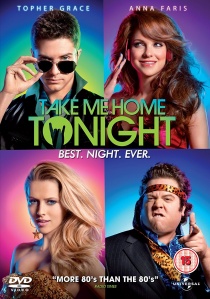 Featuring blinding neon shell suits, hairspray drenched perms, and a no-holds barred dance off at the most decadent yuppie party of the decade, Take Me Home Tonight is a hysterical and nostalgic comedy which will take you on a trip down memory lane to relive that classic era that was the 1980's! Accompanied by an amazing sound track of timeless hits, get ready to party like its 1988 with this un-PC, outrageously silly yet touching comedy!

Matt Franklin (Topher Grace) has recently graduated from MIT but instead of becoming the successful engineer that his father wishes him to be, he finds himself aimlessly stacking shelves in his local video store. When his high school crush Tori (Teresa Palmer) unexpectedly drops by the store one day, Matt gets the courage to strike up a conversation and finds himself compulsively lying about having a job at Goldman Sachs in a bid to impress her.

Following an invite from Tori to THE hottest party in town, Matt knows that the opportunity of his lifetime is finally in reach! Accompanied by his mocking and sarcastic twin sister Wendy (Anna Faris), and his wild and outrageous very-recently-unemployed best friend Barry (Dan Fogler), they arrive at the party with Matt intending to sweep Tori off her feet.

Somewhere between the stolen car and the epic dance-off, Matt, Tori, Wendy, and Barry realise that this is the night they will still be thinking about when they're old and grey, and the neon-drenched '80s will just be a distant memory....

With an awesome soundtrack guaranteed to take you back to the 80's in style, be prepared for an overload of embarrassing flashbacks, ridiculous dance moves and outrageous laugh-out-loud moments!

Related Articles
The Emoji Movie, The Emoji Movie, Cloudy With a Chance Of Meatballs 2, Movie 43, What's Your Number?, Cloudy With a Chance of Meatballs 3D, Cloudy With a Chance of Meatballs, The House Bunny, Scary Movie, Scary Movie 2, Overboard
Hacksaw Ridge, Berlin Syndrome, Hacksaw Ridge, Lights Out, Knight of Cups, The Choice, Point Break, Kill Me Three Times, Warm Bodies, I Am Number Four, The Sorcerer's Apprentice, Bedtime Stories, Ride Like a Girl, A Discovery of Witches: Season 2
Passengers, Guardians of the Galaxy: Vol. 2, Passengers, The Magnificent Seven, Jurassic World, Guardians of the Galaxy, Her, Delivery Man, Movie 43, 10 Years, The Five Year Engagement, Moneyball, Jurassic World: Fallen Kingdom, The Lego Movie 2: The Second Part, The Kid, Guardians of the Galaxy, Onward
Fantastic Beasts and Where to Find Them, Secrets & Lies, Mars Needs Moms, Fanboys, Horton Hears a Who!
Truth, American Ultra, Playing It Cool, The Calling, The Double, Spider-man Trilogy, Predators, Spiderman 3, Win a Date With Tad Hamilton, BlacKkKlansman
What If?, The Goon, Stuber
The Victim, The Victim, The Abyss, Aliens, The Rock: Criterion Edition, The Seventh Sign, The Terminator: Special Edition
Comments
Hot Pick

HotUHD
Now more stunning than ever before, return to the stunning locations and epic adventures in Peter Jackson's Middle-earth in The Lord of the Rings Trilogy, arriving on stunning 4K UHD 30th November 2020 from Warner Home Video. END_OF_DOCUMENT_TOKEN_TO_BE_REPLACED
Top PicksView