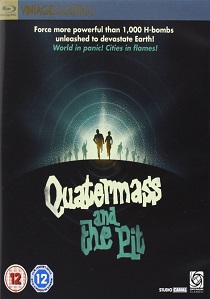 Nigel Kneale's Quatermass series has been said to have influenced everyone from John Carpenter to Dr Who. The third in the trilogy of films based on Nigel Kneale's seminal Quatermass series, Quatermass and the Pit, now digitally restored and available on Blu-ray for the first time on 10th October 2011 from Studiocanal , was made by Hammer Studios in 1967, directed by stalwart Roy Ward Baker and starring Andrew Keir as the titular scientist, battling evil alien forces that threaten to take over the world, and also stars James Donald, Barbara Shelley and Julian Glover.

During excavations in London a large unidentified object is unearthed. It defies definition although the area has always been associated with diabolical evil. Within its walls Professor Quatermass (Keir) discovers the remains of intelligent alien creatures that attempted to conquer the Earth in prehistoric times and, through their experiments on early man, altered human evolution to its present state. Though dormant for many centuries, the excavations threaten to unleash the terrifying force of the aliens upon mankind once again...

2010 saw the return to UK cinema screens of three iconic titles, following extensive digital restoration: The Railway Children, Breathless and Peeping Tom. Optimum Classic have also committed to restoring the following classics from the UK catalogue for potential cinema and blu-ray release in 2011: Don't Look Now, The Man Who Fell to Earth, Ice Cold in Alex, The Cruel Sea, Whiskey Galore!, The Lavender Hill Mob, Quatermass and The Pit and Kind Hearts and Coronets. These releases herald an increased commitment from Optimum to preserving and restoring the vast library of classic titles that they manage on behalf of Studio Canal at a new state-of-the-art cold storage facility at Pinewood studios.

DVD
When the world is locked down, they'll find their ticket out in Locked Down, released on DVD 7th June 2021 from Warner Home Video. END_OF_DOCUMENT_TOKEN_TO_BE_REPLACED
Top PicksView