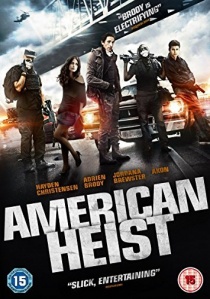 Ten years after shooting a cop on a job with his teenage brother James (Christensen), Frankie (Brody) is released from prison. Not knowing what to do with his life, Frankie quickly turns back to his criminal past and reunites with old running mate Sugar (Akon) to plan a life-changing heist.

As he tries to recruit his brother to join them for the bank robbery, Frankie finds James has turned his life around, opened his own garage and begun a steady relationship with Emily (Jordana Brewster). But will his brother's proposal be enough to renounce his new, clean ways?

UHD
When an alien spacecraft of enormous power is spotted approaching Earth, Admiral James T. Kirk resumes command of the USS Enterprise in order to intercept it, in the ... END_OF_DOCUMENT_TOKEN_TO_BE_REPLACED
Top PicksView