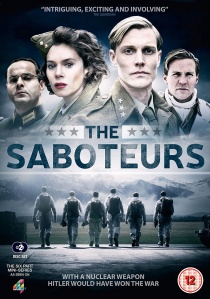 Arrow Films is pleased to announce the DVD & Blu-Ray release of the tense and breath-taking six part World War II drama The Saboteurs on 10th August 2015.

Having been a huge success in its native Norway drawing a record breaking 1.7 million viewers, the series is currently airing on More4 on Friday evenings at 9pm. The Saboteurs premiered to 336,000 viewers on June 22nd, nearly 100,000 ahead of the channels slot average.

Nobel Prize winning German scientist, Werner Heisenberg, is aiding the Nazis' efforts to develop an atom bomb using 'heavy water' from a factory deep in the Norwegian mountains. Desperate to crush Hitler's catastrophic goal, The Allies' plan and mount a series of daring sabotage missions to blow up the plant before the Germans can create their potentially devastating nuclear weapon.

An enterprise fraught with many dilemmas and epic challenges, the outcome of which will determine the future of democracy itself.

The Saboteurs is produced by The Norwegian Broadcasting Corporation NRK, in collaboration with Filmkameratene AS (Norway), Sebasto Film (Denmark) and Headline Pictures (UK). The original Norwegian series was written by Petter Rosenlund and is distributed in the UK and Ireland by Arrow Films.

DVD
Starring Hugh Laurie and written by David Hare, Roadkill, released on DVD and Blu-ray 9th November 2020 from Dazzler Media, is a fictional thriller about a self-made, forceful and charismatic ... END_OF_DOCUMENT_TOKEN_TO_BE_REPLACED
Hot PicksView