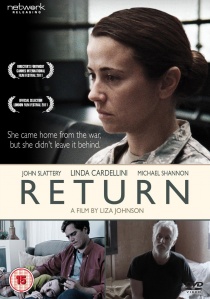 NewsDrama
News Article Go back to homepage
Return, released on DVD by Network on 6th August 2012, offers a sensitive, deeply personal account of a soldier's return from war, from the rarely explored perspective of a woman who is also a wife and a mother.
Louisa Krause, Paul Sparks, Talia Balsam, John Slattery, Michael Shannon, Linda Cardellini
Liza Johnson
Ben Howe, Noah Harlan, Abigail Disney, Charlie Birns
Network
1 hour 37 minutes
06/08/2012
Thank you for supporting DVD365.net when you order using the link(s) below. As an Amazon Associate we earn from qualifying purchases
Buy DVD
Information

Premiering to high acclaim in the Directors' Fortnight at Cannes in the 2011 Film Festival, Return, released on DVD by Network on 6th August 2012, offers a sensitive, deeply personal account of a soldier's return from war, from the rarely explored perspective of a woman who is also a wife and a mother. Linda Cardellini stars alongside Michael Shannon and John Slattery in the debut feature by filmmaker, artist and writer Liza Johnson.

Back from a military tour of duty, Kelli can't wait to rejoin her old life in the Rust Belt town she's always known. She's ready to experience the old feelings of everyday life again: the carpet under her bare feet, a cold beer in front of the television, the smell of her baby.

But, slowly, her world comes to feel unfamiliar. Her friends seem preoccupied with trifles. Her children need more focused attention than she can give. And as much as he tries, her husband Mike doesn't understand what she's been through. As dislocation ripples through her world, Kelli risks becoming an outsider. Thrown back on her own resources, she must now try to find a new way forward... 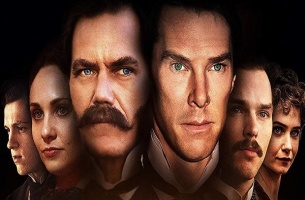 HotDVDBD
Telling the dramatic story of the late 19th century race to light up America and power the world, The Current War is released on DVD and Blu-ray 4th November 2019 END_OF_DOCUMENT_TOKEN_TO_BE_REPLACED
Comments
DVD Releases News Pick