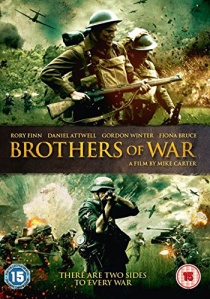 Koch Media is delighted to announce the home entertainment release of World War II drama Brothers Of War, on DVD from 1st June 2015.

Bitter rivalry, a dangerous passion, a guilty secret and a world at war. Farm boy, Jake, lives for girls, guns and adrenalin; his younger brother Greg, loves poetry. The tensions and bitter rivalry between the two finally erupt into bloody, life-changing violence. With the dark clouds of war looming over England's green and pleasant land, it is Greg who unexpectedly signs up for front line battle in France.

Against a backdrop of chaos and uncertainty, Greg discovers a world of uncompromising brutality. His journey through war-torn France exposes the very best and very worst of human nature along with the realisation that, no matter how far you run, the past will always find a way of catching up with you.