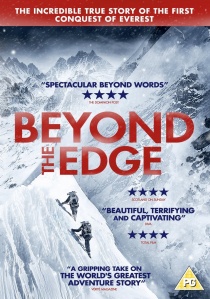 Beyond the Edge, released on DVD by Metrodome on 14th July 2014, is a feature film focused on one of the world's greatest adventure stories of all time. Edmund Hillary and Tenzing Norgay's monumental and historical ascent of Mt. Everest in 1953 - an event that stunned the world and defined a new era.

In 1953, the ascent of Everest remained the last of Earth's great challenges. Standing at over 29,000ft, the world's highest mountain posed a fearsome challenge and had already claimed thirteen lives in previous expeditions. Faced with treacherous winds, sub-zero temperatures and battling altitude sickness, the British expedition team members Sir Edmund Hillary, a modest beekeeper from Auckland, and Tenzing Norgay, an experienced mountain Sherpa, finally achieved the impossible and became the first men to stand atop Everest. News of their conquest was announced on June 2 1953 as Queen Elizabeth II prepared for her Coronation.

Both a classic triumph of the underdog story and a gripping, cinematic experience, Beyond the Edge is a tale of human endurance, tenacity and courage in the face of overwhelming odds. Following its world premiere at Toronto, the film opened in New Zealand to huge acclaim, becoming the most successful documentary there to date.

Using original colour archival footage and photographs from the time, seamlessly interwoven with dramatic re-creations of the assault, this is the first time this inspiring story has been brought to life on the big screen.

DVD
The end of the line is only the beginning in a wild, non-stop thrill ride through modern-day Japan as Bullet Train is released on DVD, Blu-ray and 4K UHD 24th October 2022 from Sony Pictures Home Entertainment END_OF_DOCUMENT_TOKEN_TO_BE_REPLACED
Top PicksView