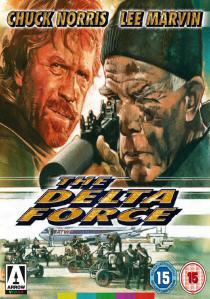 Cannon Films are known for producing some of the most enjoyable and eccentric action flicks of the '80s - but The Delta Force, which boasts scenes of Chuck Norris flying through the air on a missile-mounted motorbike, surely stands as one of their most entertaining efforts.

American Travel Ways Flight 282 has been hijacked by a group of terrorists claiming to represent the New World Revolutionary Organisation. The Delta Force, under the leadership of Captain Scott McCoy (Chuck Norris), is called in to handle the situation. Still smarting from an ill-fated hostage rescue mission several years prior, this elite squad of special forces are determined to succeed in their mission this time - and assert the might of the American military once and for all.

Drawing on a number of true-life terrorist incidents for inspiration, most notably the 1985 hijacking of TWA Flight 847, The Delta Force is a non-stop thrill ride which culminates in one of the most explosive action flick finales of all time. With Chuck Norris on hand to provide the muscle and gravelly-voiced Lee Marvin (The Killers) in his last ever screen role, The Delta Force is one mission you can't afford not to accept.

The Delta Force is released on Blu-ray by Arrow Films on 5th May 2014.

Related Articles
The Case For Christ, London Has Fallen, Touching Home, Ghosts of Girlfriends Past, Dragon Wars, Like Mike, Me, Myself and Irene, The Don Is Dead: Eureka Classics
The Big Heat, The Killers, Hell In The Pacific, The Man Who Shot Liberty Valance
My Big Fat Greek Wedding 2, One from the Heart, Don't Mess With The Zohan, My Big Fat Greek Wedding
Missing in Action, The Expendables 2
Two-Minute Warning
Comments
BD Releases News Pick