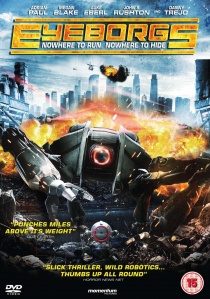 "I, Robot" meets "Gremlins" in the sci-fi action-thriller Eyeborgs, "a smart, ambitious, and fiercely independent slice of science fiction" (DVD Talk) starring Adrian Paul (Highlander), Megan Blake (The Opposite Of Sex), Luke Eberl (Letters From Iwo Jima; Planet Of The Apes) and Danny Trejo (Machete; Predators) alongside an impressive array of fantastic scene-stealing surveillance robots with ideas way above their station.

Eyeborgs may be sci-fi, but with the media currently bringing news of a recent Ministry of Defence report warning of the dangers of an "incremental and involuntary journey towards a Terminator-like reality" and suggesting that Britain must establish a policy on what constitutes "acceptable machine behaviour", perhaps it would be advisable to accept that there is more to these particular robots than meets the eye!

In the wake of another devastating terrorist attack, the United States government passes the "Freedom of Observation Act", a law requiring all communications and surveillance cameras to be constantly monitored for national security. Helping to enforce the new law are the Eyeborgs, mobile surveillance robots that can track suspicious persons wherever they may try to hide. Now everyone is under the constant watch of ODIN, the Optical Defence Intelligence Network, an all-seeing system that never sleeps, never rests and never stops "looking out for you". But what few people realize is the Eyeborgs are authorized to do more than just watch. If an Eyeborg witnesses a crime in progress when no other law enforcement agent is present, it can take whatever action is necessary to stop it.

Investigating a series of suspicious deaths, Homeland Security agent R.J. "Gunner" Reynolds (Paul) finds a link to the Eyeborgs and is led to believe that terrorists have taken over the system and are using the 'bots in a plot to assassinate the President of the USA. What he doesn't realize is the truth behind the killings is far more terrifying than any mere act of terrorism.

"Every bit as infectiously fun and overflowing with robot shootouts as you'd expect out of a sci-fi flick with this sort of title" (DVD Talk), Eyeborgs is a "slick thriller" (HorrorNews.net) that "punches miles above its weight" (Quiet Earth).

Eyeborgs will be released on DVD by Momentum Pictures on 20th June 2011.

BD
Finding praise from critics around the world, Boyhood, following the life of Mason, from early childhood to his arrival at college, is released on Blu-ray and 4K UHD 27th March 2023 from Arrow Films. END_OF_DOCUMENT_TOKEN_TO_BE_REPLACED
Top PicksView