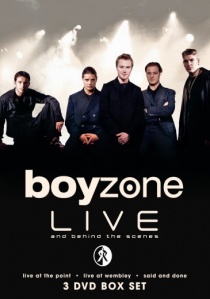 News
News Article Go back to homepage
Fans of the group Boyzone can now relive their greatest moments with the release of their first DVD boxset in eight years with Boyzone Live and behind the scenes, out to own from 26th May 2008 courtesy of Universal Pictures Video.
Universal Pictures (UK)
4 hours 19 minutes
26/05/2008
As an Amazon Associate we earn from qualifying purchases
Buy DVD
Information

Boyzone fever is set to sweep the nation next month when the hugely popular 90s Irish boyband finally reunites and kicks off their much anticipated comeback UK tour. To add to the hype and mania, fans of the group can now relive Boyzone's greatest moments with the release of their first DVD boxset in eight years! Out to own from 26th May 2008, Boyzone Live and behind the scenes courtesy of Universal Pictures Video, includes - Live at the Point, Live at Wembley and Said & Done.

Live at The Point

Boyzone return to their hometown for a live performance at The Point in Dublin. Filmed on the last night of the band's nationwide sell-out tour, this programme features eight live tracks never before heard on DVD including Picture of You, When You Say Nothing At All and No Matter What as well as exclusive pre and post show interviews and behind-the-scenes footage.

For the first time ever on DVD, watch and enjoy all seventeen poptastic numbers filmed live in concert at Wembley Arena in July 1996. The DVD includes favourites such as: Together, Here to Eternity, Believe in Me, What Can You Do For Me, Arms of Mary, When All is Said and Done, Father and Son, Key to My Life, If You Were Mine, Oh Carol, She Moves Through the Fair, Can't Stop Me, I'll Be There, Love Me For a Reason, So Good, Coming Home Now and A Different Beat.

Never seen before on DVD is the visual story of Boyzone during their early years. The DVD features four promos including: Love Me For a Reason and Key to My Life, plus exclusive interviews, on tour and backstage footage - a real look behind the scenes at the Boyzone phenomenon!

Out to own on DVD from 26th May 2008 from Universal Pictures Video, reminisce with Boyzone Live as they take you back to the 90s for some pure pop entertainment - perfect for a night in with the girls, both old and new fans alike.

DVD
In The Undoing, released on DVD and Blu-ray 22nd March 2021 from Warner Home Video, a chasm opens up in the seemingly perfect life of a successful therapist: a violent death, a missing spouse, and a ... END_OF_DOCUMENT_TOKEN_TO_BE_REPLACED
Top PicksView