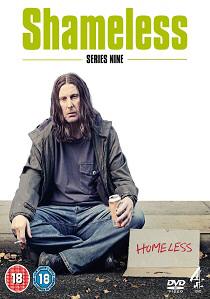 Welcome back to the not so green and pleasant pasture that is the rebooted Chatsworth Estate. Post banking crisis, mid-recession, abandoned by Council and Government alike; this is the Rise of the Underbelly - this is Shameless seceding from society! You are now entering Free Chatsworth.

Shameless: Series 9 kicks off with The Chatsworth Estate in a time of darkest austerity as half of the residents are evicted to make way for Operation New Start - a multi-agency crackdown on the benefits culture of those in social housing, led by ruthless project consultant Carmen Kenaway (Morwenna Banks: Skins, Peppa Pig) and her toxic sidekick, Feeney (Judy Flynn). But of course, in true Chatsworthians style, the residents continue to be comrades-in-arms, socially irresponsible and outrageous in their everyday rollercoaster lives.

In this series meet feisty siblings Gloria (Angeline Ball: The Commitments, Any Time Now, Bloom, Eastenders) and Dominic Meak (Stephen Lord - Route Irish, Phone Shop) who together bring their own damaged past to the estate. There are also some personal struggles for some of the cast regulars including Karen (Rebecca Atkinson) and Jamie Maguire (Aaron McCusker) whose marriage is tested when they are both tempted to stray. Kelly (Sally Carman) and Marty (Jack Deam) are expecting but their life takes a very dark turn and Carl Gallagher (Elliot Tittensor) grows up, becomes a policeman and meets a girl who steals his heart.

But much worse than all of this - Frank Gallagher needs glasses. The very notion leaves him vulnerable, fragile; flawed and unwanted. For the first time, Frank must confront the possibility that he may be a less than perfect physical specimen.

Shameless is warm, compelling, mischievous and celebratory; it's dark. It's sexy and always gut achingly funny. Catch up with this much loved and outrageous drama series with the Shameless Series 9 DVD, available to own from 25th February 2013, courtesy of Channel 4 DVD.