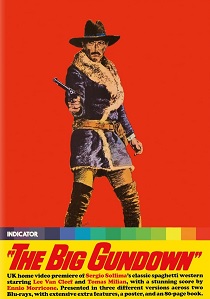 When bounty hunter Jonathan Corbett (Van Cleef) is hired to track down a Mexican peasant (Tomas Milian, in a career-defining role) who has been accused of an appalling crime, he is initially outwitted by the wily bandit. However, the relationshion between the two men soon takes an unexpected turn and they team up to take on railroad baron Brockston (Walter Barnes).

With its rousing score by legendary composer Ennio Morricone, and its politically charged screenplay by Sergio Donati (Once Upon a Time in the West) and Franco Solinas (The Battle of Algiers), The Big Gundown has earned its reputation as one of the greatest and most influential Italian westerns.

Released on Blu-ray 5th December 2022 from Powerhouse Films, this individually numbered Limited Edition includes three versions of the film - the US theatrical cut, the extended US cut, and the original 110-minute Italian version - along with a fascinating selection of new and archival extra features, a poster, and an 80-page book.

DVD
The end of the line is only the beginning in a wild, non-stop thrill ride through modern-day Japan as Bullet Train is released on DVD, Blu-ray and 4K UHD 24th October 2022 from Sony Pictures Home Entertainment END_OF_DOCUMENT_TOKEN_TO_BE_REPLACED
Top PicksView