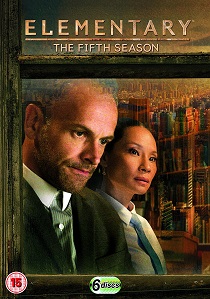 Magnify The Risks. They say some people are dangerous to know, and in Elementary: The Fifth Season, that truth never cut deeper. The erratic, unpredictable, and intellectually incomparable detective Sherlock Holmes (Jonny Lee Miller) cracks case after case for the NYPD with the help of his ever-reliable partner Joan Watson (Lucy Liu).

The balance of this time-tested team shifts as Holmes and Watson face difficult personal choices and impossible crimes. From a murderous drug gang to a rogue intelligence agency, the threats have never been starker. And from snake venom-laced meals, to invisible gunshots, to a superbug in New York's water supply, the methods have never been stranger.

Wrap your mind around the most puzzling crimes in these 24 edge-of-your-seat episodes, collected in this 6-disc set and released on DVD by Paramount Home Entertainment on 2nd October 2017.