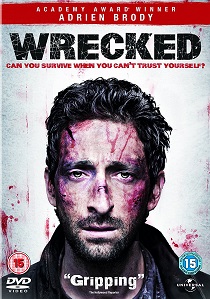 A man awakens in a mangled car wreck at the bottom of a steep cliff. Injured and trapped inside, he has no memory of how he got there or who he is. So begins Wrecked, a mysterious and relentlessly suspenseful thriller that brings our worst nightmares to life. The movie, the stunning debut feature by director Michael Greenspan, comes to high-definition Blu-ray and DVD on 29th August 2011 from Universal Pictures (UK).

In his most intense and demanding performance since The Jacket, Oscar winner Adrien Brody (The Pianist, Midnight in Paris) stars as the unnamed man who wakes trapped in the middle of nowhere, surrounded by two dead passengers, a pile of cash and a gun. He has no recollection of who he is or how he got there. Is he an innocent victim? A dangerous criminal? All he knows is he's fighting for his life and his sanity in the middle of the deep woods.

But as he attempts to free himself from the carnage and escape an impossible situation, a darker side is revealed. Even if he manages to survive, the tormented man may have to face the horrible consequences of an earlier, forgotten life.

Like a cross between Deliverance and The Bourne Identity, with echoes of 127 Hours and TV's creepy classic The Twilight Zone, director Michael Greenspan's feature debut showcases another acclaimed turn by one of the most lauded and talented actors of our time, who dominates the screen in a gut-wrenching, riveting performance. The Wrecked cast also includes Caroline Dhavernas (TV's Off the Map and Wonderfalls), Ryan Robbins (Battlestar Galactica) and Adrian Holmes (Red Riding Hood).