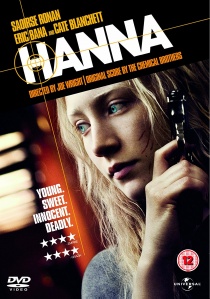 Academy Award® nominee Saoirse Ronan (Atonement, The Lovely Bones) stars as Hanna, a 16-year-old girl raised in the desolate, icy wilds of Finland by her ex-CIA agent father Erik (Eric Bana; Star Trek, Hulk) and trained to become the perfect assassin. Every moment of Hanna's childhood and adolescence has been spent building up the strength, stamina and survival instincts she needs to prepare for the day she must strike out on her own. That day has now come; armed with the skills her father has imparted to her and the mantra "adapt or die", Hanna must cross Europe and face her family's longtime enemy, lethal intelligence operative Marissa Wiegler (Academy Award® winner Cate Blanchett; Robin Hood, Elizabeth).

Featuring a ground-breaking original soundtrack from The Chemical Brothers and filmed on location in Finland, Berlin and Morocco, Hanna is "an exuberant chase thriller that pulses with energy!" (Justin Chang, Variety).

Related Articles
The Monuments Men, The Life Aquatic with Steve Zissou: The Criterion Collection, Thor: Ragnarok, Manifesto, Knight of Cups, Truth, Carol, Cinderella, How To Train Your Dragon 2, The Monuments Men, Blue Jasmine, Indiana Jones And The Kingdom Of The Crystal Skull, I'm Not There, Notes On A Scandal, Babel, The Gift, The Lord of the Rings: The Fellowship of the Ring (Special Extended Edition), The Lord of the Rings: The Fellowship of the Ring, The Talented Mr. Ripley, Ocean's 8, The House With a Clock in its Walls, How to Train Your Dragon: The Hidden World, The Hobbit Trilogy, Indiana Jones: 4-Movie Collection 4K
Lady Bird, Brooklyn, How I Live Now, Byzantium, The Host, The Way Back, City of Ember, I Could Never Be Your Woman, On Chesil Beach, Mary Queen of Scots, Little Women, The Grand Budapest Hotel: The Criterion Collection, Ammonite
Darkest Hour, Pan
Phantom Thread, The Colony, Das Boot: Season 1, Das Boot: Season 2
King Arthur: Legend of the Sword, Deliver Us From Evil, Lone Survivor, Closed Circuit, The Time Traveler's Wife, Funny People, The Hulk: Special Edition, Black Hawk Down
Silk: Series 3
Comments
UHD Releases News Pick

UHD
Now more stunning than ever before, return to the stunning locations and epic adventures in Peter Jackson's Middle-earth in The Lord of the Rings Trilogy, arriving on stunning 4K UHD 30th November ... END_OF_DOCUMENT_TOKEN_TO_BE_REPLACED
Top PicksView