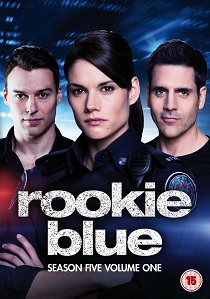 Described as "Grey's Anatomy with guns" by Los Angeles Times, the hit Canadian police drama Rookie Blue, starring Missy Peregrym (Heroes), returns with its most exciting outing yet - Season Five, Volume One, which makes its UK DVD debut courtesy of Entertainment One on 7th September 2015.

Set in Toronto, the series follows the lives of five rookie cops from fictional 15 Division who have just graduated from the academy.

Under the watchful guidance of their officers, Andy McNally (Peregrym) and her fellow rookies are in the real world working for one of the most elite units in the city. As they get to grips with their tough job and their turbulent private lives, this group of twenty-somethings soon learn the hard way that no amount of training could have prepared them for the job... or for real life.

The series begins with two lives hanging in the balance, officers Sam Swarek (Ben Bass - Forever Knight) and Chloe Price (Priscilla Faia - After the Riots) have been shot in the line of duty, but life at 15 Division must go on. The officers have sworn an oath to serve and protect, no matter the consequences. As the shell-shocked cops struggle to pull the pieces of their lives back together, they realise that even making the right choices can sometimes lead to serious consequences and they can't help but wonder if things will ever work out the way they're supposed to.

Also starring Gregory Smith (Everwood) as Dov Epstein, Charlotte Sullivan (The Colony) and Enuka Okuma (24), this gripping 11-part series produced by eOne, screened on the Universal Channel earlier this year and will be released as a three-disc set on 7th September 2015.

HotUHD
Now more stunning than ever before, return to the stunning locations and epic adventures in Peter Jackson's Middle-earth in The Lord of the Rings Trilogy, arriving on stunning 4K UHD 30th November 2020 from Warner Home Video. END_OF_DOCUMENT_TOKEN_TO_BE_REPLACED
Top PicksView