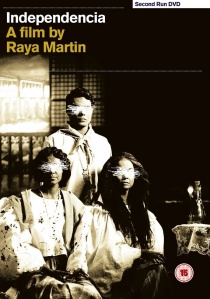 Released for the first time on home video in the English-speaking world, Independencia, released on DVD by Second Run on 11th August 2014, is a unique alternate-history fable from acclaimed Filipino director Raya Martin as he re-imagines his country's history as an elemental humanist epic.

Fleeing the American invasion of the Philippines in the early 20th Century, a mother and son retreat into the jungle where they make a home. Time passes; a wounded woman is rescued; the mother dies; a child is born. The family survive isolated from the growing chaos engulfing their country, but a storm approaches that threatens their existence as American troops draw nearer.

Ingeniously staged on studio sets that evoke the lost period of early and silent cinema, Independencia's mesmerising visual aesthetic creates a lush metaphor for the mythical history and identity of the Philippines.

HotUHD
After moving to a new town, two brothers discover that the area is a haven for vampires as the classic The Lost Boys is released on 4K UHD 20th September 2022 from Warner Home Video. END_OF_DOCUMENT_TOKEN_TO_BE_REPLACED
Top PicksView