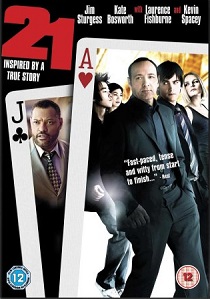 Inspired by an amazing true story and with an all-star cast, 21 is the thrilling drama about a group of students who master the art of card counting and end up taking Vegas casinos for millions. It is released on Blu-ray, DVD and UMD from 8th September 2008, courtesy of Sony Pictures Home Entertainment.

Ben Campbell (Sturgess) is a shy but brilliant M.I.T. student who finds his way to pay for his schooling through playing cards. Ben is recruited to join a group of super intelligent students lead by professor Micky Rosa (Spacey) who travel to Vegas each weekend to take on the casinos at Blackjack with their knowledge of beating the odds. Having figured out an intricate system of signals the team start seeing the money roll in. Ben finds himself getting drawn deeper and deeper into the high flying lifestyle, the money and falls for the charms of his sexy teammate, Jill Taylor (Bosworth). With so much money at stake the real challenge becomes staying one step ahead of the casinos before they rumble the scam.

21 comes with a host of exciting extra features on both Blu-ray and DVD including featurettes and a filmmaker's commentary. The Blu-ray release also includes 21 Virtual Blackjack and a Virtual Blackjack Tutorial Video for all budding Blackjack players!

DVD
A 13-year-old girl named Meilin turns into a giant red panda whenever she gets too excited in Disney and Pixar's 25th feature film Turning Red, released on DVD, Blu-ray and 4K UHD 2nd May 2022 from Walt Disney Home ... END_OF_DOCUMENT_TOKEN_TO_BE_REPLACED
Top PicksView