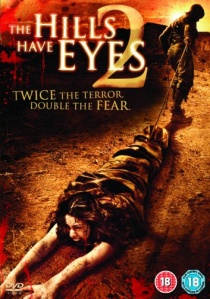 Shockingly horrifying and graphically gruesome, the chilling follow-up and remake of cult-classic film The Hills Have Eyes 2 bleeds onto DVD on 30th July 2007 from Twentieth Century Fox Home Entertainment.

The Hills Have Eyes 2 follows a group of National Guard trainees on a routine mission stop at the Yuma Flats Training and Testing Facility in New Mexico, only to find the isolated camp mysteriously deserted. After spotting a distress signal in a distant mountain range, the team decides to commence a search and rescue mission into the hills and the treacherous network of caves beneath them. Little do they know that these are the very hills where the ill-fated Carter family once visited, and that the blood-thirsty tribe of cannibalistic mutants lies in wait... But this time, the malformed patriarch isn't just looking for a quick bite - he needs female breeders to continue his family line!