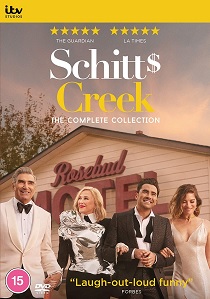 Witness the full riches-to-rags drama of the inimitable Rose family in six seasons of the smash hit comedy series Schitt's Creek: The Complete Collection, out on DVD on 29th June 2020 from ITV Studios Home Entertainment.

Nominated for four Primetime Emmy® awards, Schitt's Creek follows the "reversal of fortunes" story of the once filthy-rich Rose family. Suddenly finding themselves broke, the Rose's are forced to leave their pampered live behind and rebuild their empire in the small, depressing town they once purchased as a joke. They must now confront their new-found poverty and discover what it means to be a family, all within the rural city limits of Schitt's Creek!

DVD
In The Black Phone, released on DVD and Blu-ray 3rd October 2022 from Warner Home Video, a teenage boy is abducted by a sadistic killer and discovers a phone in his basement cell that allows him to communicate with the killer ... END_OF_DOCUMENT_TOKEN_TO_BE_REPLACED
Top PicksView