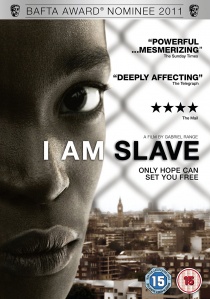 NewsHorrorDramaThriller
News Article Go back to homepage
From the award winning team behind The Last King Of Scotland, I Am Slave, released on DVD by High Fliers on 22nd August 2011, is a hard-hitting thriller about the horror and brutality of the modern day slave trade and one woman's fight to escape from it.
Nonso Anozie, Hiam Abbass, Igal Naor, Lubna Azabal, Isaach De Bankolé, Wunmi Mosaku
Gabriel Range
Jamie Carmichael, Andrea Calderwood, Katherine Butler, Pauline Burt
High Fliers
1 hour 22 minutes
22/08/2011
Thank you for supporting DVD365.net when you order using the link(s) below. As an Amazon Associate we earn from qualifying purchases
Buy DVD
Information

From the award winning team behind Death Of A President and The Last King Of Scotland, I Am Slave is a hard-hitting thriller about the horror and brutality of the modern day slave trade and one woman's fight to escape from it.

Directed by Gabriel Range and written by Jeremy Brock, the film is based on the real-life experiences of a young African girl called Mende Nazer and will be released on retail DVD by High Fliers on 22nd August 2011. It stars Isaach De Bankole (24; Casino Royale; Miami Vice), Wunmi Mosaku (Law & Order UK; Silent Witness) and Lubna Azabal (Body of Lies; Coriolanus) and was nominated for a BAFTA at this year's Awards.

The film tells the story of twelve-year-old Malia who is snatched from her father during a Muharaleen raid on their Sudanese village in the Nubar Mountains and sold into slavery to a woman in Khartoum.

After six years she is sent to London where her name is changed and her miserable life of servitude continues. She is stripped of her passport and living in fear of what might happen to her family if she tries to seek help, she once again finds herself completely trapped.

However, with the help of a complete stranger who is sympathetic to her plight, she eventually summons up the strength to make a dramatic escape back to the Sudan to find her father who never gave up hope that she was still alive and who never stopped searching for her.