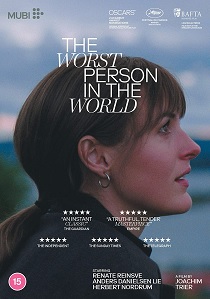 NewsComedyDramaRomanceWorld Cinema
News Article Go back to homepage
The Worst Person In The World, released on DVD and Blu-ray 20th June 2022 from MUBI, chronicles of four years in the life of Julie, a young woman who navigates the troubled waters of her love life and struggles to find her career path, leading her to take a realistic look at who she really is.
Renate Reinsve, Anders Danielsen Lie, Herbert Nordrum, Silje Storstein
Joachim Trier
Andrea Berentsen Ottmar, Thomas Robsahm
MUBI
2 hours 8 minutes
20/06/2022
#TheWorstPersonInTheWorld
Thank you for supporting DVD365.net when you order using the link(s) below. As an Amazon Associate we earn from qualifying purchases
Buy DVD
Buy BD
Information

Acclaimed filmmaker Joachim Trier (Oslo, August 31st, Louder Than Bombs) returns with The Worst Person In The World, a wistful and subversive romantic drama about the quest for love and meaning.

Set in contemporary Oslo, it features a star-making lead performance from Renate Reinsve as a young woman who, on the verge of turning thirty, navigates multiple love affairs, existential uncertainty and career dissatisfaction as she slowly starts deciding what she wants to do, who she wants to be, and ultimately who she wants to become.

As much a formally playful character study as it is a poignant and perceptive observation of quarter-life angst, this life-affirming coming of age story deservedly won Reinsve the Best Actress award at the 2021 Cannes Film Festival.

The Worst Person In The World is released on DVD and Blu-ray 20th June 2022 from MUBI.