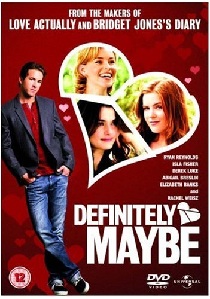 From Working Title, the award-winning makers of Notting Hill and Love Actually comes another star-studded classic, feel-good romantic comedy. Out to own from 16th June 2008 on DVD, Definitely, Maybe is a must-have purchase. Starring the irresistible Ryan Reynolds (Blade: Trinity), Elizabeth Banks (Spider Man), Isla Fisher (Wedding Crashers) and Academy Award® Winner Rachel Weis (About A Boy), with young rising star Abigail Breslin (Little Miss Sunshine), is the perfect blend of humour and romance for a girly night in or a romantic treat.

Will Hayes (Ryan Reynolds) has had three serious relationships in his life and they have all ended in disaster. After his daughter, Maya (Abigail Breslin) has her first sex-ed class she becomes interested in his love life and asks him about his relationships before he met her mother. He turns the awkward question into a game, changing names and disguising situations, so she has to guess who her mother is.

Through various flashbacks Will's love life is revealed through every disaster, proposals, heartache, and hilarity. Firstly there's his college sweetheart, Emily (Elizabeth Banks), with whom he moves to New York to work on the Clinton presidential campaign, who could be 'the one'.

But then there's Emily's best friend, Summer (Rachel Weis), whose relationship with Emily is closer than Will ever thought but whose job collides nastily with Will's. Lastly his work colleague, April (Isla Fisher), whose flighty and eccentric ways intrigue Will, especially her search for her Father's copy of Charlotte Bronte's famous novel Jane Eyre.

As his story unfolds Maya guesses which one is her mother but also realises her dad is still in love with another. Maya persuades Will to reconcile with his lost love but will she give him one last chance?

3D-BD
The surviving members of the resistance face the First Order once again, and the legendary conflict between the Jedi and the Sith reaches its peak as Star Wars: The Rise of Skywalker is released on ... END_OF_DOCUMENT_TOKEN_TO_BE_REPLACED
Top PicksView