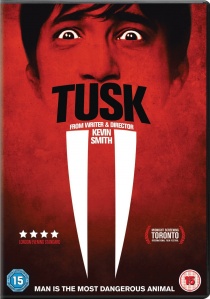 The DVD and Digital HD of Tusk also come loaded with frighteningly fun bonus features, including deleted scenes, multiple "making of" featurettes, a career retrospective featurette with Kevin Smith, an audio commentary with Kevin Smith, the original podcast that inspired the film, and more!

When podcaster and journalist Wallace Bryton (Long) goes missing in the backwoods of Manitoba while interviewing a mysterious seafarer named Mr. Howe (Parks), his best friend (Osment) and girlfriend (Rodriguez) team with an ex-cop to look for him before something horrible and sinister happens to him.

BD
Now more stunning than ever before, return to the stunning locations and epic adventures in Peter Jackson's Middle-earth in The Hobbit Trilogy, arriving on stunning 4K UHD 30th November 2020 from ... END_OF_DOCUMENT_TOKEN_TO_BE_REPLACED
Hot PicksView