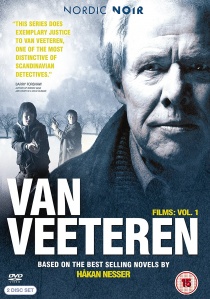 News
News Article Go back to homepage
Arrow Films are pleased to introduce a brand new Scandinavian detective to the hoards of UK based Nordic Noir lovers with Van Veeteren, released as a DVD box set on 13th May 2013.
Arrow Films
Unknown
13/05/2013
VanVeeteren
Thank you for supporting DVD365.net when you order using the link(s) below. As an Amazon Associate we earn from qualifying purchases
Buy DVD
Information

Following the success of their Wallander Original Films box set last year, Arrow Films are pleased to introduce a brand new Scandinavian detective to the hoards of UK based Nordic Noir lovers... put your hands together for Van Veeteren! The first three Van Veeteren films will be released as a DVD box set on 13th May 2013 through Arrow's Nordic Noir label, this marks the very first time that they will be available to UK viewers.

Based on the best-selling series of novels by Swedish novelist Håkan Nesser, Van Veeteren is an experienced detective who, now well into his sixties and approaching retirement, has a vast knowledge of policing and an intuitive skill for reading people and situations. Divorced, grumpy and more than a little cynical, the match stick toting Van Veeteren may be rough around the edges, but he has a heart of gold, enjoying nothing more at the end of a long day that a dark beer and a quiet game of chess.

Set in the fictitious city of Maardam, in a made-up country that could be anywhere in Northern Europe, Nesser's hugely popular series follows Van Veeteren and his two crime squad protégés, Münster and Moreno, as they set-about solving some of the most complex and severe murder cases in Nordic Noir history. Van Veeteren is a must-have for fans ofWallander, The Killing and The Bridge as well as the other recently released box set imports The Protectors and Unit One.

The three Van Veeteren films featured on this special box set release are as follows: